President of the Republic Abdelmadjid Tebboune chaired on July 6th 2020 a working session devoted to the examination of the draft national plan for socioeconomic recovery, to be submitted in the next meetings of the Council of ministers.

President of the Republic Abdelmadjid Tebboune chaired this working session, in the presence of Prime minister and ministers of Finance, Energy, Industry and Mining, Trade, Agriculture as well as deputy minister to the Prime minister, in charge of Prospective.

The concerned ministers made presentations on the practical measures proposed to implement the Government’s action plan, aimed at building a new national economy based on the diversification of growth sources, knowledge economy and the rational management of national wealth.

During the debates, President Tebboune gave detailed instructions to all the concerned ministers to carry out structural reforms as part of the Government’s general policy, likely to ensure an optimal and transparent exploitation of all the potentialities and national natural resources, starting with mines.

For President Tebboune, building a real new economy begins with the change of mentalities and the release of initiatives from any bureaucratic hindrances, the revision of legal texts in force or their adaptation according to the economic logic and not circumstantial practices, which will help better use of the national genius and create wealth and jobs without exclusion.

President of the Republic stressed the need to generate the added value in each project, calling for the exploration of all lands, including rare ones, in order to compensate for the decline in the State’s revenues.

He ordered minister of Industry to present the already available specifications in the next Council of ministers and to optimize oil and gas derivatives in order to increase the national income.

President Tebboune affirmed that the final draft of the socioeconomic recovery plan will be presented to all the Algerian economic operators, once approved in the Council of ministers, as a roadmap with implementation deadlines, to be then assessed at the end of the deadlines, pointing out that this national plan must preserve the State’s social character and the citizens’ purchasing power, notably the disadvantaged category.

At the end of the working session, President of the Republic called on the concerned ministers to start immediately, under the supervision of Prime minister, looking for efficient mechanisms able to reduce, in the short term, the useless expenditure and increase revenues by encouraging the national production, the generalization of digitization and the fight against tax avoidance as well as waste and overbilling, in order to enable the country to overcome the circumstantial difficulties caused by the double crisis of the drop in the hydrocarbon revenues and the spread of Covid-19 pandemic.

President of the Republic called to attack rigorously dirty money whose possessors try to use to hinder the radical change operation which began on 12 December 2019. 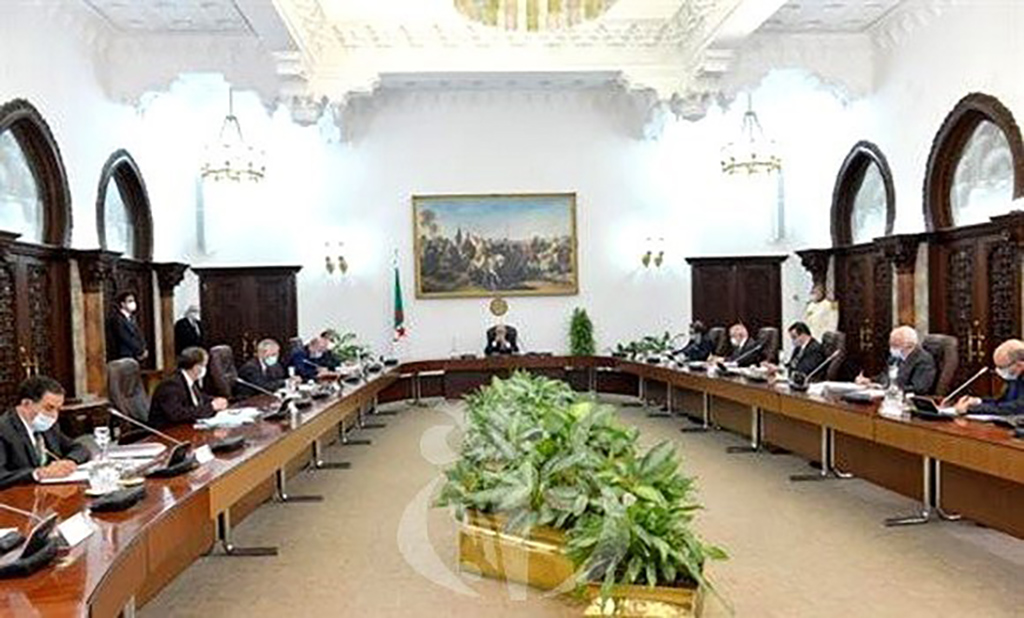