Algerian Foreign Minister, Mr. Sabri Boukadoum welcomed, Thursday, the level of relations between Algeria and Tunisia, which have a special and exceptional character, reaffirming the permanent commitment to perpetuate the tradition of consultation and coordination on regional and international issues between the two countries.

This statement, reported by the Tunisian presidency, came at the end of the meeting between President of the Tunisian Republic, Mr. Kaïs Saïed and Foreign Minister, Mr. Sabri Boukadoum.

This meeting “was an opportunity to express our great satisfaction with the exceptional level of bilateral relations between our two countries, and our continued commitment to perpetuate the tradition of consultation and coordination on regional and international issues,” he added.

“Everyone knows that relations between Algeria and Tunisia have a special and exceptional character, thanks to the strong and deep relations linking the two countries.

“We are one people in two states sharing a glorious past, facing today the same challenges and nurturing the same hopes and ambitions for a better tomorrow,” said Mr. Boukadoum.

The meeting was also an opportunity for Mr. Boukadoum to thank President Kaïs Saïed for having offered him the renewed opportunity to continue the common march on the path of achieving the legitimate aspirations of both peoples to more growth and progress. 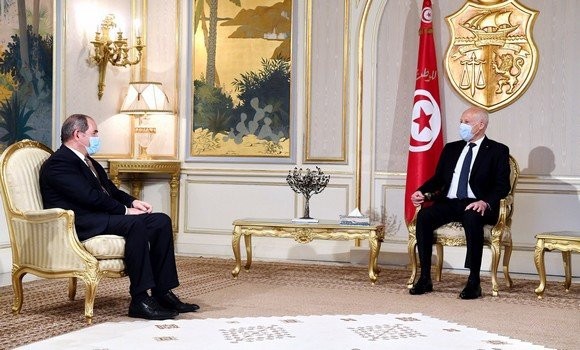